Revision of Pay and Allowances of Lieutenant Governors of Union Territories

The undersigned is directed to say that on the implementation of the recommendations of the 7th Central Pay Commission as per Government of India Notification dated 25 th July, 2016,
the Casual Labourers with Temporary Status will continue to receive their wages with effect from 01.01.2016 as per provisions of the Casual Labours (Grant of Temporary Status & Regularisation) Scheme, worked out on the basis of the pay scales of Group ‘C’ as per Level 1 of the Pay Matrix recommended by the 7 th Central Pay Commission and approved by the Government provided they are matriculate. In case of the similarly placed non- matriculate Casual Labourers with Temporary Status the above benefit of wages w.e.f. 01.01.2016 may he extended only after imparting the requisite training by the respective administrative Ministries/Departments on the lines indicated in the MOF O.M. No. 1/1/2008-IC dated 24.12.2008.

What is the first month salary of new Central Government employees?

“There is lot of curiosity among young job seekers to know the average first-month salaries of Central Government employees.”

There is no defying the fact that almost all Indian youth, who have completed their education, do dream of getting a CG employment. The perks are plenty – job stability, good pay, regular increments and countless benefits…!

In its report, the Seventh Pay Commission has said that while the CG should be employing about 40,48,707 workers to carry out its tasks, it currently has only about 33,01,536 persons working for them. In other words, as on January 1, 2014, there are about 7,47,171 vacancies in various CG departments.

UPSC and SSC are two different bodies that conduct exams for recruitment to central government. Between January 2004 and 2014, about 11,13,329 employment orders have been issued for various Central Government posts.

Central Government employees are currently classified as A, B and C. The designation, basic salary and other benefits of an employee are calculated based on this classification. As of January 2014, there are 91,501 higher officials in Group A; 2,80,892 officials in Group B; and 29,29,143 employees in Group C. Rs. 1,29,599 crores was the money spent on giving pay and allowances to all these employees in the year 2012-13. This is about 1.30 percent of the country’s total GDP.

Central Government employees’ salaries and benefits are currently being paid as per the recommendations of the Seventh Pay Commission. Rs. 18,000 is the minimum wages and Rs. 2,50,000 is the maximum wage that is being paid. The table below provides detailed list of the minimum and maximum wages of Central Government employees as per all the Pay Commissions – from the First to the Sixth. 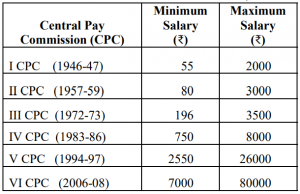 The Sixth Pay Commission had fixed the salaries as per the Grade Pay System. The Seventh Pay Commission has calculated the salaries as per the Level System. The new job recruitment Notifications for Central Government vacancies now mention the Grade Pay(6th CPC) or Level (7th CPC). One can calculate the basic pay of an employee with the help of the table given below.

Calculations of Dearness Allowance, House Rent Allowance, and Transport Allowance are usually done based on the city where the employee is posted. A Central Government employee is entitled to many other benefits too. These are decided based on factors like designation, nature of the job, location, etc.

If you want to find out the first month salary for a job that you desire, and if you are aware of its Grade Pay or Level and the city where you are most likely to get posted, you can very easily find out the minimum monthly salary for the post.

No.1-2/2016-IC.—Whereas, vide its Resolution No.1-2/2016-IC notified in the Gazette of India, dated the 25th July, 2016, the Government of India accepted the recommendations of the Seventh Central Pay Commission in respect of the categories of employees covered in the Terms of Reference contained in its earlier Resolution No.1/1/2013-E.III(A) dated the 28th February, 2014.

And, whereas, the Government has considered it necessary to make the following changes in the recommendations of the said Seventh Central Pay Commission in respect of the said categories of employees, namely:—

(1) The Defence Pay Matrix, (except Military Nursing Service (MNS)), which has 24 stages shall be extended to 40 stages similar to the Civil Pay Matrix;

(3) To rectify the factual errors appearing in Level 10B and Level-12 of the pay matrix of MNS and in view of the changes in the IOR in the Defence Pay Matrix, the first stage of corresponding Levels of Pay Matrix of MNS shall also change. Accordingly, the Pay Matrix (MNS) shall be revised;

(4) The IOR of Level-13 of Civil Pay Matrix shall also be enhanced from 2.57 to 2.67. Accordingly, the Civil Pay Matrix as contained in Annexure-1 mentioned in para 6 of the aforesaid Resolution dated the 25th July, 2016 shall be revised. The revised Civil Pay Matrix is at Appendix-1;

Ordered that this Resolution be published in the Gazette of India, Extraordinary.

Ordered that a copy of this Resolution be communicated to the Ministries/Departments of the Government of India, State Governments, Administrations of Union Territories and all other concerned.

Shri. V.Loganathan has been writing constructive feedbacks on many articles published in gservants.com. The following article clearly shows that in 7th CPC Pay Matrix,there is a wide gap between PB-3 and PB-4 Grades. Since the higher Grades in PB-3 are holding Administrative responsibilities, it must addressed in a way that they should not feel aggrieved. The article written by V.Loganathan is given below..

“……As per Pay Matrix approved in the 7th Pay Commission, there is wide gap between erstwhile PB3 & PB4 Pay Bands. The following statement will speak for itself the wide gap between these two Pay Band Posts entry Level Pay from 1-1-2016:

Length of Service to be taken into account in Pay Matrix

The picture of fair salary would be incomplete without taking length of service in a category/post contribution of his similarly placed fellow colleagues (generalists in Administration other than Scientists) at next level of hierarchy into account and their fitment table should also be increased proportionately to a fair level .

After all it’s a team management/work disparity, skills, individual and collective performance and adequate internal communication and collective bargaining on salary issues. When many are paid very lesser pay & perks, they have a tendency to work with heart-burning.

If you look at the above statement for a pre-revised basic pay in the pay range of Rs.15,000/- there is wide difference in the revised pay fitment. The gap should be reduced drastically from 1-1-2006 based on length of service one put in a category etc.

In many cases. Senior Officers put in more than 30 years of Service getting less emoluments/Pension when compared to many junior Officers after implementation of Sixth Pay Panel Report from 1-1-2006. The suggestion to Govt. is that length of Service in a category coupled with duties & responsibilities should be given its due weight-age to relieve heart-burning among Senior Officers of Non-IAS cadre and similarly placed Officers in other Ministries. In many cases the increase in emoluments ranging about more than 100% to 300% in PB 3 & PB 4 posts. Due weightage should be given to PB 3 category (Group-A) with effect from 1-1-2006 by applying Matrix formula..”