Kind attention of Railway Board is invited to Federation’s PNM Agenda Item No. 15/2017, proposing grant of 3rd financial upgradation under MACP Scheme to the Station Masters entered in GP 2800 which got merged with GP 4200 / Level-6 w.e.f. 01/01/2016 vide Railway Board’s instructions dated
02/08/2016 (RBE No. 93/2016), pursuant to acceptance of 7th CPC recommendation. Federation is however disappointed that the Railway Board has not yet considered for granting GP 5400 / Level-9 as financial upgradation to those Station Masters who have completed 30 years of service.

Federation has however learnt that the Railway Board vide letter No. PC-V/2009/ACP/5/CR dated 11/12/2017 has issued a clarification to the General Manager (P), Central Railway stating that the upgradation of ASM in GP 2800 to the post of SM in GP 4200 has to be counted as promotion for the
purpose of MACPS and therefore the GP 4200 (now Pay Level-6) cannot be treated as entry Grade. This clarification of the Railway Board is totally unjustified due to the fact that the said decision violates policy instructions as mentioned below:-

“Where all the posts are placed in a higher scale of pay, with or without a change in the designation; without requirement of any new qualification for holding the post in the higher grade, not specified in the Recruitment Rules for the existing post, and without involving any change in responsibilities and duties, then placement of all the incumbents against such upgraded posts is not be treated as promotion/upgradation”.

Since the upgradation of ASMs GP 2800 to GP 4200 as SM has been done as a result of acceptance of 7th CPC recommendation by the Government with slight change in the designation but without change in the qualification and any change in responsibilities and duties, therefore, the placement of all such incumbents against the upgraded posts cannot be treated as promotion / upgradation.

“Promotions earned/upgradations granted under the ACP Scheme in the past to those grades which now carry the same Grade Pay due to merger of pay scales/upgradations of posts by the 6th Pay Commission shall be ignored for the purpise of granting upgradation under MACPS”.

Federation further states that based on the above position, Railway Board have issued clarification vide letter dated 10/06/2009 (RBE No. 17/2009), that on the analogy of Para 5 of the Annexure to Board’s letter dated 10/06/2009, that promotions earned or upgradations granted under ACP Scheme of 01/01/1999 in the past to the four pay scales mentioned above, which now carry the Grade Pay of Rs.1800 shall be ignored for the purpose of MACPS.

Federation requests the Railway Board to kindly review the case denovo, taking into account the points raised above as also the PNM Agenda Item No. 15/2017 and grant 3rd MACP to the Station Masters in GP 5400/ Pay Level-9 on completion of 30 years service. The subject will be discussed in the ensuing PNM meeting with the Railway Board on 25th/26th April. 2019.

Sub: Grant of financial up-gradation under MACPS in the promotional hierarchy- (instead of Grade Pay hierarchy) – Item No.3 of Record Note of discussion held between the Federation and EDs, Railway Board on 12/10/2015 on MACPS Anomalies-reg. 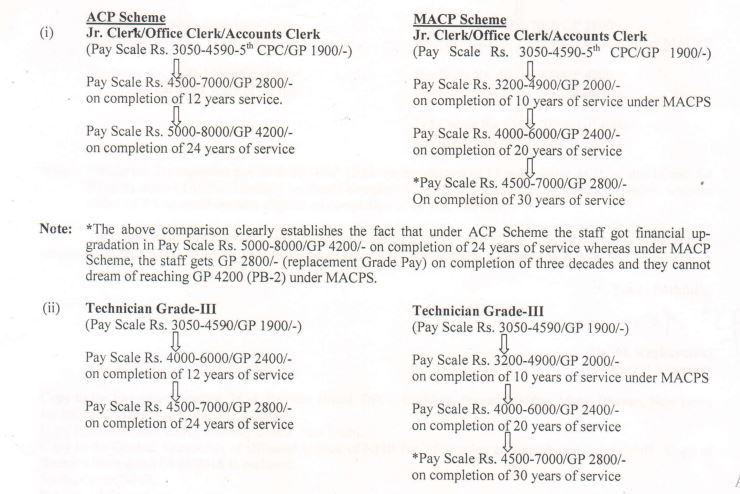 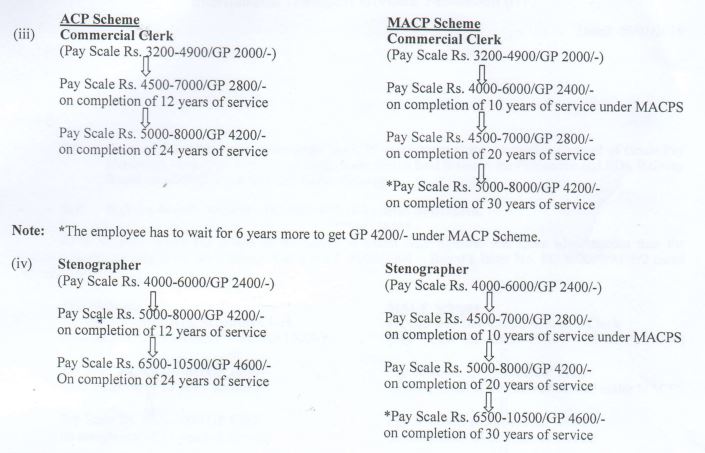 Sirs,
Sub:-Grant of financial upgradation under MACPS in the promotional hierarchy- (instead of Grade Pay hierarchy)-reg.

The undersigned is directed to refer to item NO.3 of the record note of discussions held an 12.10.2015 on MACPS anomalies. In respect of the item No.3, it has been decided to indentify the cadres for whom ACP Scheme is more advantageous than MACP Scheme. Thereafter, a reference will be made to DoP&T.

In view of the minutes of the meeting, it is requested to provide the details of the cadres to wham ACP Scheme is more advantageous than MACP Scheme along with supporting documents so that a reference may be made to DoP&T.

sd/-
for Secretary, Railway Board