As per media news, the Cabinet committee in its meeting tomorrow is likely to approve an additional Dearness Allowance for Central Government employees due from July 2015.

The second installment of this year, from July to December 2015, an additional DA is finalized hike by 6% as per the calculations recommended by 6th CPC. Now the Central Government employees and pensioners are getting 113% DA and DR, after the declaration by the Cabinet Committee on DA, it will become 119%.

6 months of the All India Consumer Price Index (CPI-IW) from Jan to Jun 2015 is the key points to calculate DA and DR from July 2015, the below table describes the calculation clearly… 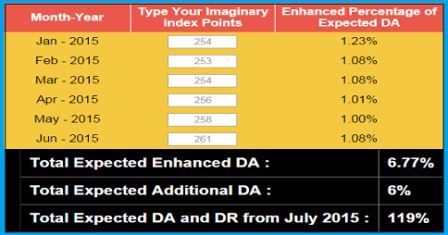 JAMMU: National Mazdoor Conference (NMC) today appealed to Prime Minister Narendra Modi to release the pending installment of 7 per cent DA due from July this year for the central government employees.

“We appealed to the PM to announce and release the pending installment of 7 per cent DA due from July this year for employees and pensioners of the Centre as well as state governments in view of increasing inflation and price hike of essential commodities,” NMC President Subash Shastri sa ..