Subject: Modification of Level-12A and 13 of Defence Pay Matrix – Issues regarding.

Issue No. 3 – Re-exercise of option for coming over to the Revised Pay structure in case of Level 12A and 13

sd/-
(B.D. Barua)
Deputy Secretary to the Government of India

1. “GoI, MoD has extended sanction of Operation Rhino for a further period of 3 months with effect from 15/06/2017 to 14/09/2017 or till the termination of Op Rhino whichever is earlier”. Units may publish Part II orders accordingly. 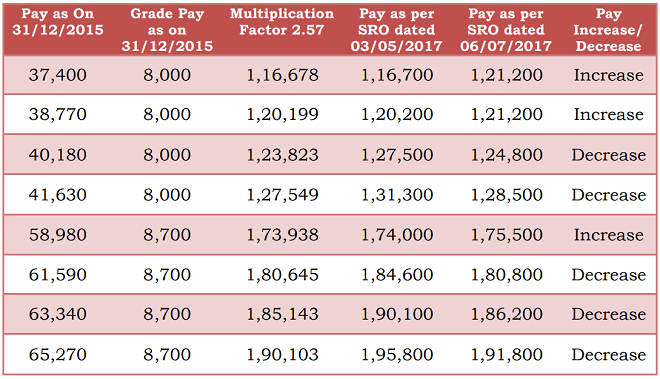 7th CPC Defence Pay Matrix Table in Gazette Notification : The existing system of Pay Band and Grade Pay has been replaced with separate Pay Matrices for both Defence and Military Nursing Services personnel. Fixation of pay of each employee in the new Pay Matrix as on 01.01.2016 would be done by multiplying his/her basic pay by a factor of 2.57.

Note-2 After fixation of pay in the appropriate Level as specified in Note-1 above, the subsequent increments shall be at the immediate next Cell in that Level.

c) General recommendations on pay recommended by the Commission have been accepted with the following exceptions in Defence Pay Matrix, namely:

i. The index of Rationalisation of Level 13A (Brigadier) in Defence Pay Matrix may be revised upward from 2.57 to 2.67.

Click to view the 7th cpc notification for defence personnel

Cabinet approved improvements in the Defence Pay Matrix in Some Levels

The Cabinet approved further improvements in the Defence Pay Matrix by enhancing Index of Rationalisation for Level 13A (Brigadier) and providing for additional stages in Level 12A (Lieutenant Colonel), 13 (Colonel) and 13A (Brigadier) in order to bring parity with Combined Armed Police Forces (CAPF) counterparts at the maximum of the respective Levels.

Some other decisions impacting the employees including Defence & Combined Armed Police Forces (CAPF) personnel include :

5.2.2 The Commission has devised pay matrices for civil and defence forces personnel, after wide ranging feedback from multiple stakeholders. The common aspects of the two matrices and the unique elements in the defence pay matrix are outlined in the succeeding paragraphs.

General Approach to the Pay Matrices: Civil and Defence

5.2.3 Pay levels have been set out in a pay matrix, separately for civilian and defence forces personnel. The Commission has evolved a fresh approach by merging the grade pay and pay bands into distinct pay levels. The approach regarding the pay levels and pay matrix has been explained in Chapter 5.1. Some of the major points in the pay matrix which have a common bearing on civilian and defence forces personnel, are highlighted below.

5.2.6 An exception to this approach has been made in the case of Brigadiers/equivalents where pay for the rank has been arrived at as per the fitment table notified by the Ministry of Defence through its Special Army Instructions of October 2008.

5.2.7 Fitment: The starting point of a Sepoy (and equivalent), the entry level personnel in the defence forces, has been fixed in the Defence Pay Matrix at ₹21,700. The starting point in the existing pay structure is ₹8,460 for a Sepoy/equivalent. The fitment in the new matrix is essentially a multiple factor of 2.57. This multiple is the ratio of the new minimum pay arrived at by the Commission (₹18,000) and the existing minimum pay (₹7,000). The fitment factor is being applied uniformly to all employees. It includes a factor of 2.25 to account for DA neutralisation, assuming that the rate of Dearness Allowance would be 125 percent at the time of  implementation  of  the  new  pay  as  on  01.01.2016.  The  actual  raise/fitment  being recommended by the Commission is 14.29 percent. An identical fitment of 2.57 has also been applied to the existing rates of Military Service Pay (MSP), applicable to defence forces personnel only.

5.2.8 Rationalisation: An ‘index of rationalisation’ has been applied while making enhancement of levels from Pay Band 1 to 2, 2 to 3 and 3 onwards on the premise that role, responsibility and accountability increases at each step in the hierarchy. At the existing PB-1, this index is 2.57, increasing to 2.62 for personnel in PB-2 and further to 2.67 from PB-3. Recognising the significantly higher degree of responsibility and accountability at levels corresponding to Senior Administrative Grade, the entry pay is recommended for enhancement by a multiple of 2.72. The same multiple is also being applied at the HAG and HAG+ levels. At the apex level the index applied is 2.81 and for the Service Chiefs/Cabinet Secretary the index has been fixed at 2.78.

5.2.9 As noted in Chapter 5.1, dealing with the Civilian pay matrix, marked increase was accorded to directors in the GP 8700 at the stage of implementation of the VI CPC Report. Accordingly in the matrix the rationalisation index applied at this level has been fixed at 2.57, lower than the index of 2.67 applied to existing PB-3 officers. A similar formulation has necessarily to be applied to the defence pay matrix since the Lieutenant Colonels also received a marked increase in their pay level, post VI CPC recommendations. Since the defence services have an additional level in the existing PB-4 and there is a common pay level for SAG level officers in Defence and Civil, the Commission has applied the rationalisation index of 2.57 also to the officers in the rank of Colonel and Brigadier and their equivalent.

5.2.10 MACP: The Commission is not recommending an increase in the number of MACPs. For defence forces personnel this will continue to be administered at 8, 16 and 24 years as before. In the new pay matrix defence forces personnel will move to the immediate next pay level in the hierarchy. Fixation of pay will follow the same principle as that for a regular promotion in the pay matrix.

5.2.11 Equivalence in Pay Levels for Certain Levels: The starting pay level for officers at Group `A’ entry level is identical at ₹56,100 in the case of both civilian and defence service officers. Similarly the pay of the Major General and Joint Secretary and equivalent officers and those above [viz., Lieutenant General (in HAG, HAG+, Apex) and Chief of each defence service] has been kept identical with their civilian counterparts. Identical pay levels has been devised for JCO/ORs and their civilian counterparts corresponding to the existing pay bands and grade pay.

5.2.12 For defence forces personnel, there are two separate matrices, one for the Service Officers and JCO/ORs and another for the Military Nursing Officers. The existing ranks among Officers and JCO/ORs in the Defence Forces personnel has been kept in view while devising the matrix. There are a number of common strands in the Civil and Defence Pay Matrices, indeed the principles and philosophy on which they are based are identical. In the case of the pay matrix for Military Nursing Officers (MNS), the Commission has adopted an approach that blends elements of the principles and philosophy adopted in devising the pay matrices with the existing uniqueness in the pay structure of MNS officers. Some of the unique elements that merit mention in the defence Pay Matrix have been outlined below:

5.2.13  Commencement  of  Matrix:  The  commencement  of  the  Defence  Pay Matrix  for combatants corresponds to the existing GP 2000, which is the induction level for Sepoys and equivalent.

5.2.14 More Compact: The Pay Matrix designed for the defence forces personnel is more compact than the civil pay matrix keeping in view the number of levels, age and retirement profile of the service personnel. For example, the term of engagement of various ranks of JCOs/ORs are fixed and of shorter duration. Service Officers on the other hand are given time scale promotion upto the rank of Colonel and Equivalent and will therefore move, from one pay level to another, in accordance with the stipulated time frame.

5.2.16 The Commission emphasises that the pay structure designed by it for the defence forces personnel has been done keeping in view (a) some of the aspects in their rank structure unique to them and (b) pay structure is not intended to determine the status of the personnel vis-à-vis their counterparts on the civil side.

5.2.17 In the design of the pay matrix for Military Nursing Service (MNS) Officers, the Commission has kept in view the approach followed by previous Pay Commissions as well as historical and traditional relativities between the Armed Forces Officers and Military Nursing Service Officers. In particular the pay scales/grade pay based on the V and VI CPC Reports were kept in view.

5.2.18 Accordingly, the following Pay matrix for Military Nursing Service (MNS) Officers is recommended by the Commission:

5.2.19 As indicated earlier in the case of the Defence Pay Matrix, the Commission has adopted an approach that blends elements of the principles and philosophy adopted in devising the matrices for civil and defence forces personnel with the existing uniqueness in the pay structure of MNS officers.

5.2.20 Therefore while the minimum pay at the entry level for MNS officers is identical with their civil and defence counterparts, as is the application of the fitment in pay for officers migrating into the matrix, the Commission has had to adopt a different approach while determining minimum pay corresponding to the existing grade pays other than GP 5400 (PB-

3). In doing so, the Commission has adopted a formulation as under:

5.2.21 While this formulation has been adopted for all ranks of MNS officers, two exceptions have been made for purposes of rationalising the pay structure:

5.2.22 The defence forces personnel, in addition to their pay as per the Matrices above, will be entitled to payment of Military Service Pay for all ranks up to and inclusive of Brigadiers and their equivalents. The Commission recommends an MSP for the four categories of Defence forces personnel at ₹15,500 for the Service Officers, ₹10,800 for Nursing Officers, ₹5,200 for JCO/ORs, and ₹3,600 for Non Combatants (Enrolled) in the Air Force per month. MSP will continue to be reckoned as Basic Pay for purposes of Dearness Allowance, as also in the computation of pension. Military Service Pay will however not be counted for purposes of House Rent Allowance, Composite Transfer Grant and Annual Increment.

17 Without moderation upwards, by use of formula, the minimum pay for a Captain of MNS would be