Intelligence inputs had been available of a likely attempt by terrorists to infiltrate into the military installation in Pathankot area. In response, preparatory actions had been taken by the Indian Air Force (IAF) to thwart any such attempt.

Due to the effective preparation and coordinated efforts by all the security agencies a group of terrorists were detected by the aerial surveillance platforms as soon as they entered the Air Force Station at Pathankot. The infiltrators were immediately engaged and contained within a limited area, thus preventing them from entering the Technical zone where high value assets are parked.

Through timely and prompt action by all agencies, the likely plan of the terrorists to destroy valuable assets of the Air Force has been foiled. Currently the operation is going on. The Air Officer Commanding-in-Chief of Western Air Command is on location and personally supervising and coordinating with the Army, NSG and local civil police for exchange of information and operational activity.

The Prime Minister Shri Narendra Modi has strongly condemned the terror attack in Pathankot and has said that enemies of humanity who cannot see the nation succeed, had attempted to cause harm to the Indian Armed Forces. He saluted the Armed Forces for successfully defeating the designs of the terrorists, and paid homage to the jawans who were martyred during the operation. The Prime Minister said this while speaking at a public meeting for the inauguration of the Centenary Celebrations of His Holiness Jagadguru Dr. Sri Shivarathri Rajendra Mahaswamiji of Sri Suttur Math at Maharaja College ground in Mysuru. Following is the excerpt from the PM’s speech: 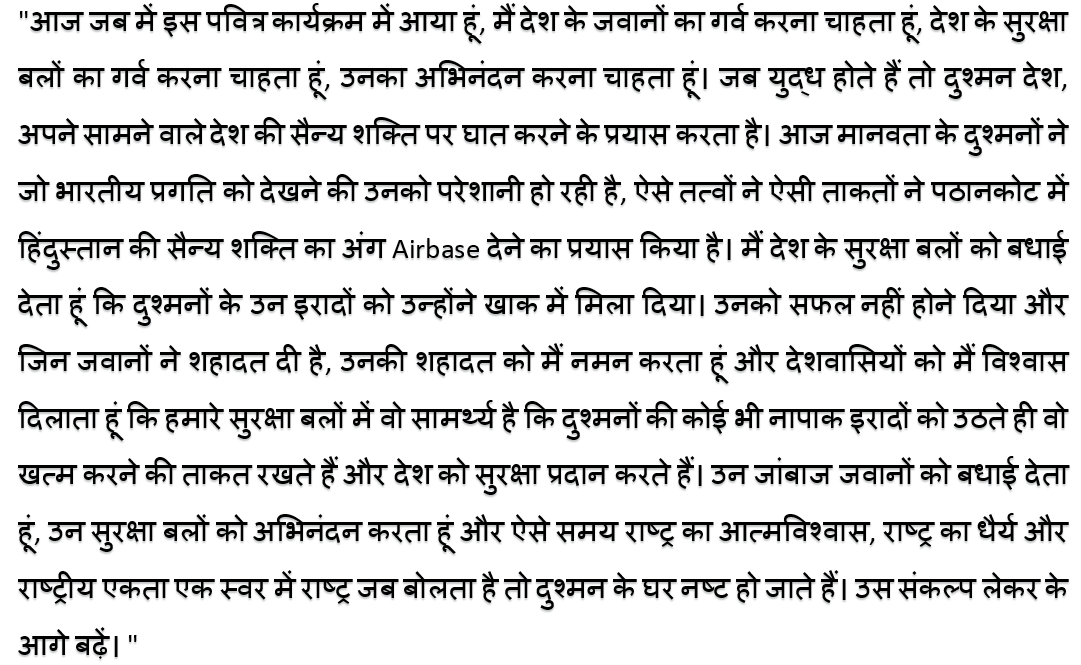