Parity of remuneration of Army, Navy and Air Force with civilian counterparts

Parity of remuneration of Army, Navy and Air Force with civilian counterparts

188 Shri D. Raja
Will the Minister of DEFENCE be pleased to state :-
(a) whether it is a fact that the status and remuneration of the Army, Navy and Air Force personnel are not equal to their civilian counterparts; and

(b) if so, the details and measures proposed to be taken for an equal treatment in status as well as monetary benefits with the civilians?
ANSWER

MINISTER OF STATE IN THE MINISTRY OF DEFENCE DR. SUBHASH BHAMRE

(a) & (b): No, Sir. The status of Defence Service Personnel is equal to their Civilian counterparts as per the Table of Precedence. So far as remuneration is concerned, the basic principles for pay fixation in respect of Civilians and Defence Services under Seventh Pay Commission are same with a common fitment factor of 2.57. However, to compensate for the unique aspects of Defence Service, Military Service Pay (MSP) has been provided up to the level of Brigadier. The MSP has in fact been made admissible to Defence Forces personnel only in recognition of the special conditions of the service experienced by them which sets them apart from civilian employees. As a result, while the pay on initial induction of a civilian employee at the lowest pay level (in Level-1) is Rs.18,000/-, the pay on initial induction of a defence force personnel, who gets inducted at their lowest pay level which is Level-3, inclusive of MSP will be Rs.26,900/-. Similarly, while the pay for a civilian officer inducted in Level-10 would be Rs.56,100, the pay for a defence service officer inducted in Level-10, inclusive of MSP will be Rs.71,600/-.

In addition, compensation is granted by way of allowances for unique risk and hardship borne by Defence personnel. Further, benefits in cash and kind admissible to Defence Service personnel include (i) Free rations or Ration Money Allowance in lieu of free rations (ii) tax concessions available in Canteen Stores Depot (iii) Concession vouchers for travel in Railways and by Air.

The Government has provided benefits over and above the recommendations of the 7th Pay Commission by increasing the Index of Rationalisation (IOR) at level 12A, 13 and 13A, providing additional three stages in level 12A and increasing the number of stages in the Defence Pay Matrix from 24 to 40.

(b) The allowance shall not be admissible to those service personnel who have been provided with the facility of Government transport.

(c) Officers in Pay Level 14 and above, who are entitled to use official car, will have the option to avail official car facility or to draw the Tpt Allce at the rate of Rs15,750 + DA per month.

(d) The allowance will not be admissible for the calendar month(s) wholly covered by leave.

(e) Physically disabled service personnel will continue to be paid at double rate, subject to a minimum of Rs 2,250 + DA.

Higher Qualification Incentive (HQI). HQI have been introduced and extended to JCOs/OR.

Language Allowances to Officers, JCOs and ORs as per the recommendations of 7th CPC…

Language Award to Officers, JCOs and ORs as per the recommendations of 7th CPC… 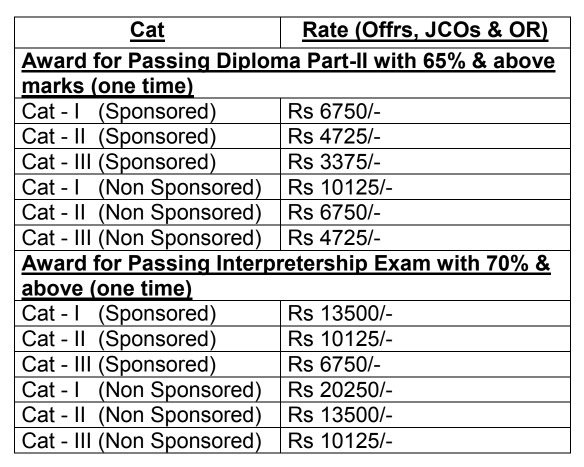 CEA Scheme: It has two components, CEA and Hostel Subsidy. Both cannot be claimed concurrently.

(a) CEA: Rs 2250/- per month per child for two children only. CEA is admissible from Nursery to 12th classes.

(i) Reimbursement should be done just once a year, after completion of the financial year (which for most schools coincides with the Academic year).

(ii) Certificate from the head of institution where the ward of government employee studies should be sufficient for this purpose. The certificate should confirm that the child studied in the school during the previous academic year.

(b) Hostel Subsidy: Rs 6750/- per month per child for two children only. Applicable when children are studying in a boarding school away from the place of posting of the father/mother.

(i) Certificate from the head of institution should suffice, with the additional requirement that the certificate should mention the amount of expenditure incurred by the government servant towards lodging and boarding in the residential complex.

(ii) The amount of expenditure mentioned, or the ceiling as mentioned at Para 2.3 (b) above, whichever is lower, shall be paid to the employee.

Note : The combined amount of Tuition Fees and Hostel Charges shall not exceed Rs 10,000/- Per month.