The meeting of the 7 CPC National Anomaly Committee was held today (17/7/2018). Shri Chandramoul i, Secretary (P), DOPT presided over this meeting. The Department of personnel had identified the following six items only for discussion:

I. Item No. 3- Removal of condition of 3% stipulated to grant bunching benefit

2. Item NO 4- Fixation of pay on promotion

3. ltme No. 5- Removal of Anomaly in Pay Matrix

4. Item No 8- Lesser Pay in higher level of Pay Matrix

5. Item No. 9 ~ Bunching of steps in the revised pay structure

6. Item No. 14 – Grant of GP 5400 to Sr Section Officer of Railways and AAOs of IA&AD and Organised Accou:1ts (Civil Accounts, Postal Accounts and Defence Accounts)

The above items were subjected to discussions and the fo llowing decisions were taken.

Item No 3 – The Govt. will consider as to how the matter could be resolved after assessing financial implications

Item No 4 – The suggestion of the Staff Side to fix the pay on promotion at the next higher stage after granting one increment was not accepted. After discussion it was agreed that Govt would address the issue on case by case basis. Those who are covered by the anomaly described under this item have been advised to make representation to Fin. Ministry directly. The staff side however insisted that the entire anomaly would he resolved if two increments are granted while on promotion/MACP.

Item No. 5 & 8 – it was agreed by the official side that this is an aberration ·and shall be addressed.

Item No 9- Rejected by official side

Item No 14 – The matter is under consideration of the Govt…….

Complete Detail is given below… 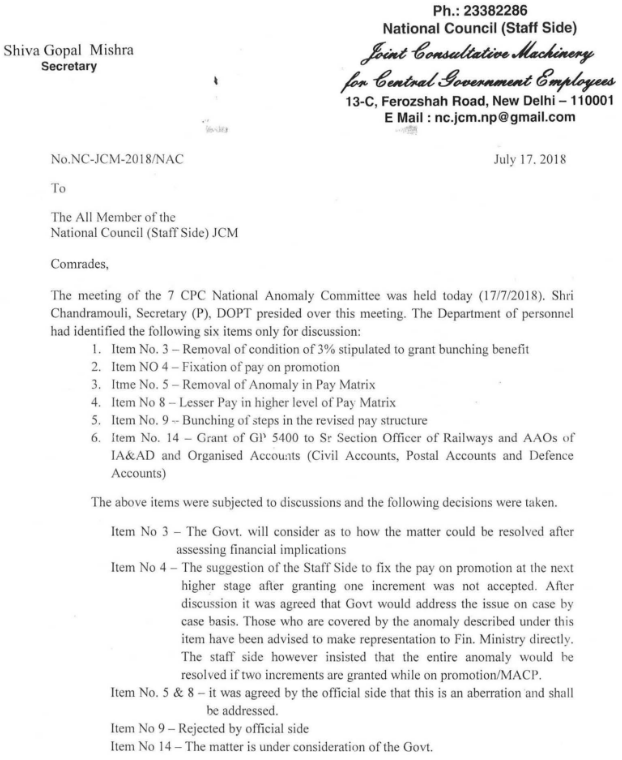 Minutes of the Meeting held on 11.01.2018 to discuss the admissibility of the agenda items received from the Staff Side, NC (JCM) for discussion in the National Anomaly Committee (NAC) for the 7th Central Pay Commission

Subject: Minutes of the Meeting held on 11.01.2018 to discuss the admissibility of the agenda items received from the Staff Side, NC (JCM) for discussion in the National Anomaly Committee (NAC) for the 7th Central Pay Commission.

Sir,
Please find enclosed a copy of the Minutes of the meeting held under the Chairmanship of Joint Secretary (Establishment) on Thursday the 11th January, 2018 at 1500 hours in Room No. 190, conference Room, North Block, New Delhi with the representatives of Staff Side, NC(JCM) for information and necessary action.

Yours faithfully,
(D.K. Sengupta)
Deputy Secretary to the Government of India
Tel. 23040255

MINUTES OF THE MEETING HELD ON 11.01.2018 TO DISCUSS THE ADMISSIBILITY OF THE AGENDA ITEMS RECEIVED FROM THE STAFF SIDE FOR DISCUSSION IN THE NATIONAL ANOMALY COMMITTEE (NAC) FOR THE 7TH CENTRAL PAY COMMISSION

A meeting was held under the chairmanship of Shri G.D. Tripathi, Joint Secretary (Establishment), Department of Personnel & Training with the representatives of Staff Side of the National Anomaly Committee and senior officers from the other Ministries/Departments concerned at 3.00 p.m. on 11.01.2018 in Room No. 190, North Block, DoPT, New Delhi to consider the admissibility of the 18 itmes of anomaly forwarded by the Staff-Side of the National Council of JCM for settlement through discussion at the NAC constituted after the Seventh Central Pay Commission. The list of participants is at Annexure.

Sub:- Items proposed by the Staff-Side NC(JCM) for discussion in the National Anomaly Committee — Comments of DOPT regarding

Kindly refer to your cited letter.

We are sending our comments on each of the items on which the official side has conveyed objection.

However, we request you to convene a meeting so that the Staff Side can meet, discuss and finalize the items. The containing correspondence in this matter will only delay convening the NAC meeting.

Members of the Standing Committee of NC/JCM(Staff Side)

A reference has been received from the DoP&T (Government of India), wherein they have put an objection to our agenda we have submitted to the National Anomaly Committee.

To give them a proper reply, it would be in all appropriateness that, Standing Committee Members of the National Council(JCM) (Staff Side), available in Delhi, should meet on 14th December, 2017 at 13.00 hrs. in JCM Office, 13-C, Ferozshah Road, New Dlehi, to discuss and decided the strategy.

PROTEST AGAINST BETRAYAL OF NDA GOVERNMENT

CONFEDERATION OF CENTRAL GOVERNMENT EMPLOYEES AND WORKERS DECIDED TO ORGANISE

THOSE HANDS WHICH ARE AFRAID OF RAISING AGAINST INJUSTICES

THOSE TONGUES WHICH ARE AFRAID OF VOICING AGAINST INJUSTICES

ARE SYMBOLS OF SLAVERY AND SURRENDER.

Seventh Central pay Commission Report was submitted to Government on 19.11.2015. Most of the recommendations, especially in the case of Minimum wage, fitment formula, Pay scales of most of the cadres, Allowances, Advances, MACP, CCL, etc. are most retrograde. 7th CPC recommendations are the worst recommendations after the 2nd Pay Commission recommendations (1960). The National Joint Council of Action (NJCA) comprising the National Council JCM Staff Side (mainly Railways, Defence and Confederation) gave notice for indefinite strike to Government on 09.06.2016, seeking modifications in the recommendations. Government refused to call the NJCA leaders for a negotiated settlement and unilaterally declared the decisions of the Cabinet on 29.06.2016. NJCA decided to go ahead with the indefinite strike. On 30.06.2016, Group of Cabinet Ministers including Shri Rajnath Singh, Home Minister, Shri Arun Jaitley, Finance Minister and Shri Suresh Prabhu, Railway Minister held discussion with the NJCA leaders. It was assured that Minimum Pay and Fitment formula will be increased and a High Level Committee will be constituted to submit recommendations in this regard to the Government. It was also assured that all other issues arising out of implementation of 7th CPC will be considered favourably. Four months time limit was also fixed for implementation of the assurances. Based on the above assurances the indefinite strike was deferred for four months.

Committees were constituted to delay or deny the demands placed by staff side.

1. Allowances Committee delayed its report for about ten months to deny increase in HRA rates and arrears from 01.01.2016.

2. Pension Option-I Committee rejected the one and the only favourable recommendations of the 7th CPC i.e; Option-I parity for pre-2016 pensioners.

3. NPS Committee categorically stated that withdrawal of NPS is not under the purview of the committee.

Some of our friends, who are welcoming and supporting the Government’s decision on allowances are arguing that never in the past Revived Pay and Revised Allowances were given from the same date and for HRA etc. retrospective effect was not given. They consciously want to hide the fact that in the past revised allowances including HRA were granted from the month/next month of notification of Revised Pay Rules. Even if that practice is taken as a precedence, this time employees have every right to get Revised Allowance including HRA from 01.07.2016, as Revised (Pay) Rules 2016 was notified on 25.07.2016. Similarly, never in the past HRA rates were reduced by Pay Commissions. Those who support the Government’s decision are deliberately hiding this fact to somehow justify their stand and misguide the employees, because of their guilty conscience.

As the dominant organisations of the NJCA have left from the path of struggle for realization of the 7th CPC related justified demands raised in the July 11th indefinite strike charter, Confederation has decided to carry forward the struggle against the betrayal of the Government and non-implementation of assurances given by the Hon’ble Ministers. We have made it open that we strongly disagree and disown the stand taken by the Secretary, National Council JCM staff side, (Who is also the convenor of NJCA) by welcoming and thanking the Government for the decisions on Allowances including HRA. Confederation represents the sentiments of entire Central Government employees pensioners especially grass root level workers. It cannot be a party to any statement or action which the ordinary workers feel as betrayal of their cause. Confederation shall continue its struggle against the injustices meted out to the Central Government employees and Pensioners (including Autonomous body employees and pensioners, Gramin Dak Sevaks and casual, Contract workers) by the NDA Government.

Descending to the level of submitting to the dictates of the Government, compromising on the basic principles of trade Union, leaving away the path of struggle ignoring the of principles of collective bargaining, getting addicted to the JCM machinery of never ending, no-result-oriented discussions and consultations — is not the tradition of Confederation. Confederation is a different organisation which our critics and enemies cannot understand.

We are fighting against a Government which is aggressively implementing neo-liberal reforms and we know that struggle path is tough and difficult and require sacrifices. Eventhen, we prefer, that path than the path of opportunism, surrender and compromises. Eventhough we have not won our battle in full, we firmly believe that whatever achievements and benefits the NDA Government was compelled to grant (Example – enhancement of Bonus ceiling to 7000, eligibility for gratuity to NPS employees. 5th Pay Commission recommended parity to pre-2016 pensioners (option-3), microscopic modifications in HRA at minimum level and some other allowances including enhancement of Fixed Medical Allowance to Pensioners and retention of some of the allowances recommended for abolition etc.) is only because of the continuous nationwide campaign and struggle conducted by the Confederation and Confederation alone. Those who never participated in any strike or struggle and only enjoyed the fruits of the struggle and sacrifice of others can never understand the importance of struggle or strike. Empty vessels always go on making much noise, but we believe in action.

It is in this background, the National Secretariat of Confederation of Central Government Employees & Workers has decided to intensify our struggle. To express the strong protest, anger and resentment of the employees, against the totally negative and indifferent attitude of NDA Government and also against the betrayal of the Group of Cabinet Ministers of NDA Government, Confederation calls upon the entire employees to organize mass protest demonstration on 25th July 2017 (25.07.2017 Tuesday) at all centres at centralized places and burn the orders on HRA issued by the Government. Wide publicity may be given to the programme through local print and electronic media and also social media.

The next phase of agitational programmes will be decided by the National Secretariat meetings of Confederation scheduled to be held at Bengaluru on 9th August 2017.

All affiliated organisations and C-O-Cs are requested to make the above programme a grant success.