Demands of the Central Government Employees-NC JCM Staff Side

As you are aware that the Central Government employees are in quite anguish as agitating various issues since 1st January 2016 after submission of report of the 7th CPC. In the Standing Committee, JCM Staff Side have raised many issues which are still unresolved, the National Council is not taking place since more than a decade, the Standing Committee also not called since one year. The various Government employees are agitated and are demonstrating on the Charter of Demands submitted to you as well as Group of Ministers, headed by Hon’ble Home Minister on 30th June 2016.

Main issues of increasing Minimum Wage, Fitment Formula as well as announcing Guaranteed Pension at par with the Old Pension Scheme are creating lots of anguish in the mind of the Central Government Employees.

The JCM Staff Side feels that the Government have no priority for redressal of the grievances of Central Government employees which is a very serious trend and machinery of the JCM have become defunct.

We hope being the Chairman of National Council – JCM, you should immediately call a meeting of JCM and issue necessary instructions to Secretary DOPT and other Secretaries of other departments of Government of India to co-operate with the Staff Side and have regular meetings of National Council / Departmental Council JCM meetings as prescribed as per scheduled.

Is Government Contemplating to Increase Fitment Factor from 2.57 to 3.68 under 7th CPC? – Parliament Q&A

(a) whether Government is contemplating to increase fitment factor from 2.57 to 3.68 under 7th CPC to all pay levels, as demanded by employees associations;

(b) if so, the details thereof and by when it would be announced; and

(c) if not, the reasons for betrayal from assurances given by Home Minister and Railway Minister etc. to employees associations in 2016?

MINISTER OF STATE IN THE MINISTRY OF FINANCE (SHRI P. RADHAKRISHNAN)

(a) to (c): The Minimum Pay of Rs. 18,000 p.m. and Fitment Factor of 2.57 are based on the specific recommendations of the 7th Central Pay Commission in the light of the relevant factors taken into account by it. Therefore, no change therein is at present under consideration. 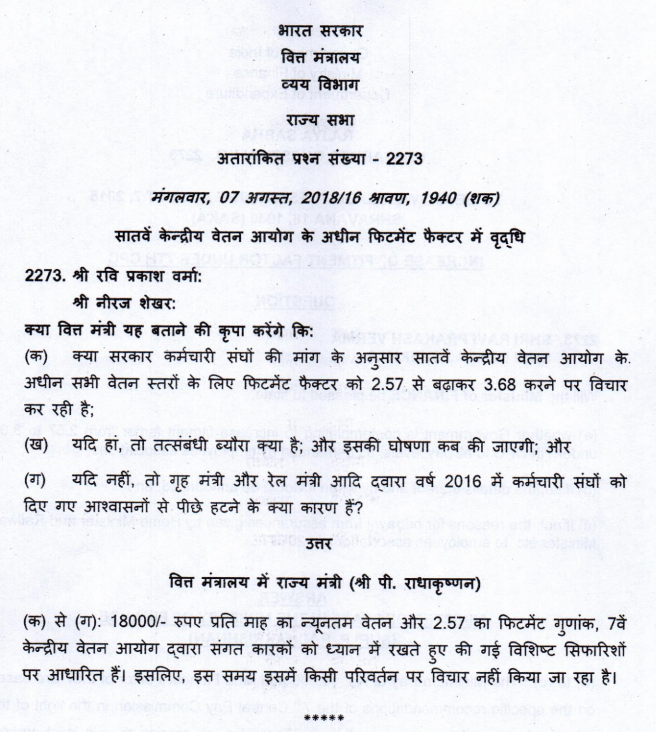 “Whether the last Pay Commission has suggested productivity linked pay hike to the deserving employees to eliminate below average or mediocre performance…?”

Whether the Government is considering an alternative for increasing the salaries and allowances of Central Government employees and pensioners in future instead of forming Pay Commission…?

The Minister of State for Finance Shri P.Radhakrishnan said as reply in the Parliament to the questions on 27th July 2018 as follows…

(a) whether the reports of successive Pay Commissions have been increasing the burden on Government finances/exchequer in partially accepting their recommendations for increase in wages and if so, the details thereof?

(b) whether the last Pay Commission has suggested productivity linked pay hike to the deserving employees to eliminate below average or mediocre performance and if so, the details thereof?

The Seventh Central Pay Commission in Para 5.1.46 of its Report proposed withholding of annual increment in the case of those employees who are not able to meet the benchmark either for Modified Assured Career Progression (MACP) or regular promotion within the first 20 years of their service.

(c) whether such periodic hikes in wages resulting from Pay Commission recommendations trigger similar demands from the State Government/public utility employees, imposing burden on already strained State finances and if so, the details thereof?

(d) whether the Government is considering an alternative for increasing the salaries and allowances of Central Government employees and pensioners in future instead of forming Pay Commission and if so, the details thereof?

No such proposal is under consideration of the Government.

The NJCA met today and took note of the inordinate delay in honouring the commitment made by the Government on 30th June, 2016 in respect of Minimum Wage, Fitment Formula, Scrapping the New Contributory Pension Scheme, Option No.1 to Pensioners, Outsourcing, Regularization of Contract/Casual Workers, JCM revival etc.

At the end of the deliberations it was decided to adopt a resolution and forward the same to the Government.

Copies of the Resolution and letter to the Cabinet Secretary are enclosed herewith, which are self-explanatory.

The NJCA of the organizations, participating in the JCM, met today and adopted the enclosed resolution.

The NJCA was extremely unhappy to note that the government did not honour its commitment made to the leaders of the organizations when they met the Hon’ble Home Minister and Finance Minister in the presence of the then Railway Ministers on 30.06.2016 on the basis of which the Indefinite Strike which was to commence on 11.07.2016 was deferred.

The reply 10 a question asked by Shri Neeraj Shekhar in the Upper House of the Parliament (Rajya Sabha) given by Hon’ble Minister of State for Finance, Shri P. Radha Krishnan, on 06.03.2018 Minister, which is reproduced below, has further angered the Central Government employees.

(a) Whether Government Is actively contemplating to increase minimum pay from Rs.18,000/· to Rs.21,000/· and filment factor from 2.57 to 3, in view of resentment among the Central Government employees over historically lowest increase in pay by 7th Central Pay Commission (CPC);

(b) If so, the details thereof and the date from which it would be implemented; and

(c) If not, the reasons for the callous attitude of Government towards Government Employees?”

“(a),(b)&(c) – The minimum Pay of Rs.18,000/- p.m. and fitment factor of 2.57 are based on the specific recommendations of the 7th Central Pay Commission in the light of the relevant factors taken into account by it. Therefore, no change therein is at present under consideration”.

The NJCA has decided to meet again on 18.08.2018 10 consider the response, if any, from the government to this letter and to the enclosed resolution.

In case of the continuing negative attitude of the government, the NJCA will be left with no other alternative but to revive the decision of Indefinite Strike action, which was deferred on 06.07.2016 on the basis of the assurance given by the Group of Ministers on 30.06.2016.
Sincerely yours,

The National JCA, which met today (03.07.20 18) at New Delhi as per the notice issued by the Convenor, after deliberations, came to the painful conclusion that the government had been unfortunately indulging in chicanery for the past two years by not honouring their commitment made to the NJCA leaders on 30.06.2016. The NJCA which was formed to pursue the demands and issues of the Central Government Employees especially those emanating from the recommendations made by the 7th CPC in the matter of Wage Revision, New Pension Scheme etc. had deferred the Indefinite Strike action, which was to commence from 11.07.2016, on the solemn announcement held out by the Group of Ministers, consisting of the Hon’ble Home Minister, Finance Minister and the then Railway Ministers. The Govt had categorically stated that they should set up a High Power Committee to look into the matters concerning the upward revision of Minimum Wage Fitment Formula etc. with a direction to submit its report within four months. The NJCA had made reasoned submissions as to the fallacy of the computation of Minimum Wage made by the 7th CPC.

The meeting further noted that the report of the committee, set-up by the Government under the Chairmanship of the Secretary, Pension, to look into the grievances of the employees and officers over the newly introduced Contributory Pension Scheme in place of the existing Defined Benefit Pension Scheme, has been kepi pending by the Government without taking any action whatsoever, thereby denying the benefit of Defined Benefit Of Pension to the employees recruited on or after 1.1 .2004.

The meeting also noted that, rejection of Option No.1, recommended by the 7th CPC, to the Pensioners on the specious ground that the said recommendation was not feasible to be implemented, was nothing but denial of legitimate parity between the past and present Pensioners.

The meeting noted with deep concern and anguish that the government has virtually closed down the doors of negotiation by not convening the meeting of the National council JCM for the past 8 years.

a) Upward Revision of Minimum Wage and Fitm ent Formula
b) Scrapping the New Contributory Pension Scheme.
c) Allow Option No.1 as one of the Pension Fitment Formula.
The meeting has directed the Convenor to bring to the notice of the Cabinet Secretary and through him the government the resentment and discontent of the employees and await their response up to 07.08.2018 and put into operation the decision to revive the decision of Indefinite Strike action immediately, thereafter, in case no negotiated settlement is brought about on the various demands included In the Charter of Demands .

All Members of the NJCA

Dear Comrades,
Sub: Holding of meeting of the NJCA

It has been decided to hold meeting of the National Council of Action (NJCA) on 3rd July, 2018 from 16.oo hrs, in JCM Office, 13-C, Ferozshah Road, New Delhi

The following would be the issue of discussion:-

(i) To take stock of the current situation in regard to non-settled of major pending issues, viz. improvement in Minimum Wage and Fitment Formula.

(iii) Other pending issues related to National and Departmental Anomalies.

All of you are requested to make it convenient to attend the said meeting so as to take the consensus decision for future course of action in the prevalent scenario.